Help Ajay eat and sleep at EuroStar
Posted on Softwaretestingclub.com: Thursday, July 8th, 2010 at 11:36 AM | By: Rosie Sherry

Ajay has a ticket to EuroStar, but he could really do with some help with accomodation and food costs. Can you help?

We’ve set up a ChipIn Widget with a target of $800, all money goes directly to Ajay, we’re just helping promote a worthy cause.

We think Ajay is worth investing a few dollars into. Go on…
Posted by Tony Bruce at 05:22 No comments:

I wrote this on the way home from the Masterclass, posted a few days later though.

So I'm on my way home from the first day of a TDD Masterclass with Jason Gorman. Some of you will recognize the name from Code Smell Of The Week.

I had a good day.

I didn't struggle as much as I thought I would and in fact the biggest struggle I had was when I was paired with a non Java Developer. I don't mean that as any disrespect to him but he was late to the classes (later than I was) and hadn't yet made the mental switch from his usual language to Java. And I only know (a bit) of Java. I followed his lead and so managed to confuse us both, I should have taken the lead until he settled in and then followed his lead (as the experienced coder).

When I was paired up with Java Devs or Devs that knew Java and had a bit of guidance I was fine.

We went through a couple of coding exercises and essentially covered TDD basics. A couple of which I'll list here:


Resist the urge to refactor your tests until they have passed or you run the chance of going off in a tangent and paying too much attention to the tests.

Keep your tests simple, test one thing at a time or your tests will get more and more complex and you may start trying to test rather than doing TDD.

Keep your tests individual, you are testing one thing at a time, if your test relays on another test you run the risk of a tests failing for the wrong reasons.

In order to use TDD you need to discipline yourself and follow the basics until they are second nature. I thought that while I'm working on my coding I may as well start using the basics so that when I've got my coding to a level I'm happy with I'll have already been practicing TDD.

I'm glad I took the course and would recommend it to proficient and beginner coders alike.

Tomorrow, onto Mocks!
Posted by Tony Bruce at 02:38 No comments:

A night of free booze and talking about testing.

Had a good time at the London Tester Gathering. Great to catch up with people and meet some new ones.
Lucky for me though, Rob's already completed a brief write up
I'll add a picture that Rosie from the SoftwareTestingClub took of Anand and I checking out The Testing Planet 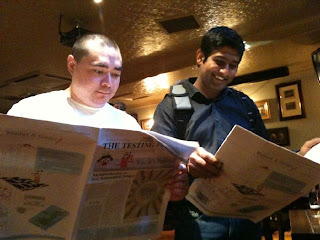 Both Rob and Rosie have managed to capture my triple chins in just the perfect lighting. Thanks
A few more pictures.
Posted by Tony Bruce at 13:26 No comments: