The February London Tester Gathering will be on Thursday 7th February at The Shooting Star. 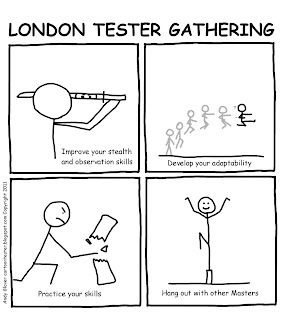 The plan:
We have a room from 6:00pm onwards

Being a SDET at Skype - Martin Hall

Hope to see you there.

Tony Bruce.
Posted by Tony Bruce at 09:16 No comments:

To be aware of my conditioning totally, not partially, means my mind must be highly sensitive, mustn’t it? Otherwise, I can’t be aware.

To be sensitive means to observe everything very, very closely; the colours, the quality of people, all the things around me. I must also be aware of what actually is without any choice. Can you do that?


Jiddu Krishnamurti - The Awakening of Intelligence

Why would I need excuses?

Recently uTest posted "8 Common Excuses in Software Testing" and within the comments there was a link to "Excuses for testers when bugs are caught in later testing cycles/UAT/Production".

My immediate thought was 'WTF? Why would I need excuses?'.

Am I wrong? Do I need excuses?

Or am I getting reasons and excuses mixed up?  Are some people taking them to mean the same thing?

At the end of "Excuses for testers when bugs are caught in later testing cycles/UAT/Production".  There is this sentence 'Well these are not actually excuses. These can be the actual reasons why an application is shipped to client with major bugs.'

The way I understand the two in this context are:

1.a basis or cause, as for some belief, action, fact, event, etc.: the reason for declaring war.

2.a statement presented in justification or explanation of a belief or action.

1.to regard or judge with forgiveness or indulgence; pardon or forgive; overlook (a fault, error, etc.): Excuse his bad manners.

2.to offer an apology for; seek to remove the blame of: He excused his absence by saying that he was ill.

3.to serve as an apology or justification for; justify: Ignorance of the law excuses no one.


I am not a gate keeper, I am an information provider, I have limited time to provide what information I can.

I will do my best, the people around me will do their best and sometimes we will not be able to investigate everything.

I'm happy to explain things but make up excuses?  I think that will do more harm than good.

There are plenty of reasons why issues end up in production, learn from them, explain, improve how you test and what you test.


28/01/13 Update.
Forgot to add, what and how you are testing and what you are not testing should be communicated and continuously communicated as you delve deeper into the software.
Posted by Tony Bruce at 10:38 9 comments:

So a while back a bunch of clever people started this thing called Weekend Testing.


You should already be aware of it, if not, look into it. Good times.

And out of it grew Weeknight Testing.

Weeknight Testing slowed down as we all got busy with life and there hasn't been a session for quite while.

Sharath has been in contact and we're looking at reviving it.

If there is anything you would like covered or if you're interested in running a session let us know.

I think (tbc) we're going to be looking at running it in different ways, not sure exactly yet but I think we'll mix between in person and on-line sessions.

Details on a couple of past sessions:

The January London Tester Gathering will be on Tuesday 15th January at The Shooting Star.

The plan:
We have a room from 6:00pm onwards

Hope to see you there.

Tony Bruce.
Posted by Tony Bruce at 04:40 No comments: