So another London Tester Gathering has just passed and once again it seemed to go well and everybody learned a little, met some people and had a good time.

My thanks to Thoughtworks for sponsoring and for running a retrospective type deal on the evening.

We started the night with the usual hello and a few announcements.

Neil Fletcher then gave us a intro to Thoughtworks explaining a little about how they do things, what they do.

Thoughtworks then ran a retrospective type deal about testing.

As usual I was busy saying hello to the regulars and meeting new comers so I missed the full explanation of what we were doing but in general it seem like we were writing various issues with testing.

We then grouped the issues and split into teams to discuss them and pick one to speak about in front of everybody.

I'm not to sure how well the retrospective type thing went down, I thought it was a interesting experiment although in a environment where people just want to have a chat it was hard to get people motivated and to stick with it. A lot of the items we wrote down are things we usually chat about anyway.

My group were discussing whether testing is still seen as a separate entity and part of the over the wall mentality.

My thoughts - impossible to answer as it differs from each organisation and from each person.

There were quite a few recruiters which is great, good to see recruiters taking a interest in what is happening in the testing community.

There were also a couple of people completing uni and looking to start a career in testing which is also great to hear.

I actually remembered to bring my camera this time but I didn't remember to check the memory card.
Managed to get 4 pics before I ran out of space. Andy Smith had his camera with him so he was appointed as the official London Tester Gathering Photographer of the evening. I'll put his pics up once he sends them across.

Meanwhile here are a couple of pics I took while Neil was speaking. 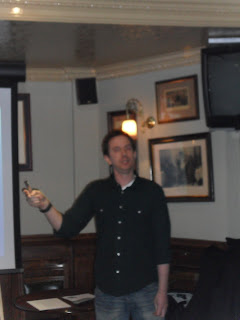 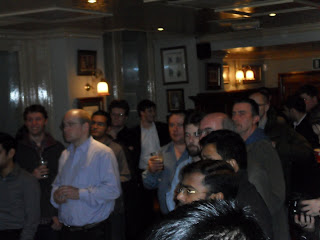 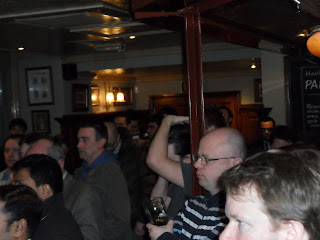 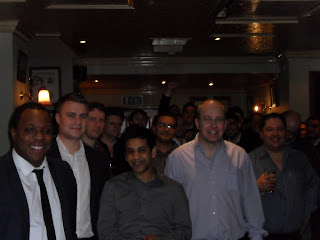 Thanks to all that attended and please add your thoughts!
Posted by Tony Bruce at 11:36