So #agiledevprac has been and gone.

I had a great time.


During the Monday my fellow speaker Ant and I had a chance to hang out with Maik Nogens.

Maik's a great guy, if you see him (you can't miss him, he's 8ft tall, although everybody looks 8ft tall when they are standing next to me) say hi.

We had a walk around Potsdam and sampled a couple of Bratwurst.  This is my second time in Potsdam and I think it's a great place, nice, quiet and picturesque.

On the first night there was a speakers dinner at Walhalla.

Jose stood up and gave a short speech welcoming everybody.

The food itself was OK, the company was great.

Ant and I had both chosen a fish dish which came with bacon sauce. BACON. SAUCE. How could you not?!

We'd been waiting and looking forward to it for weeks. We'd been imaging all sorts of amazing creations.

It was one of the biggest disappointments ever. It is a cream sauce with bits of bacon in it.

Ant and I shared a table with a number of people and we spent the most time talking to Ray Scott and Vagif Abilov.

I've come across Ray and Vagif before in my travels but have never had a chance to sit down and have a proper talk.

It was great to do so.

After dinner there was a short visit to the hotel bar and then off to sleep.


Over the next few days there were: 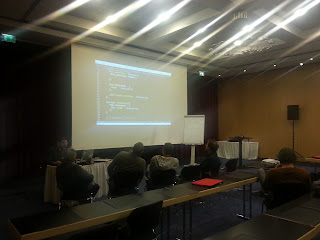 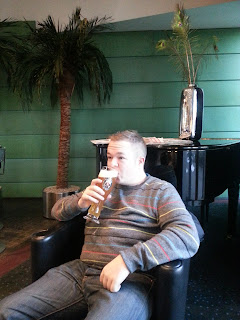 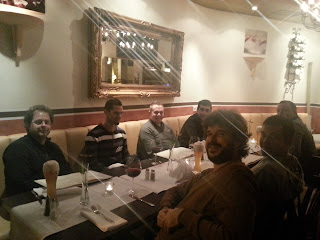 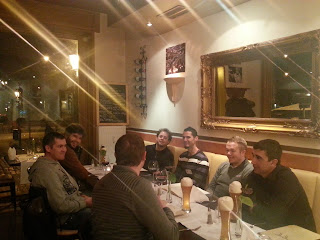 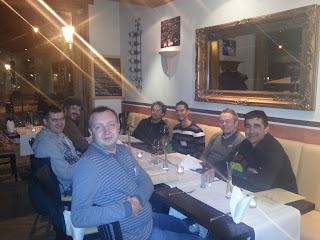 
In my opinion, over the next few days there were some good talks, some OK talks and some talks that didn't quite work.

Conferences are essentially a meeting of people who want to contribute, teach, learn and share.

It's not just attending the talks.

Make the effort to meet new people and talk and you will get untold value from a conference.